Whether you decide to include a hand-written note or start a full-blown customer appreciation week, the main thing to keep in mind is that any effort should show gratitude to your customers.

As a writer, people tend to send me notebooks. Lots of notebooks. And though I do have an affinity for them, I’m actually quite particular about them. In fact, there’s only one brand of notebook I use. Baron Fig.

I could list all the reasons why I like Baron Fig notebooks, as there are many, but the main reason I keep using them is this: the very first time I ordered a notebook from them they sent a handwritten letter thanking me for my business.

Outside of the novelty of it, what really made an impact was their gratitude. They didn’t need to include the note, but the fact that they did spoke volumes. I would wager if you think about all your favorite brands, they’ve probably done something similar.

Knowing that thanking customers will grow your business is just the first step. Now you need to put it into practice. With that in mind, here’s a list of seven things you can do to say “thank you” to your customers.

Feature them on your social channels

Validation is a great feeling. Whether it’s someone telling you did a good job on a project, or a “like” on your Insta post, getting that stamp of approval is always welcome. So, how good would it feel if a brand you love showed they felt the same?

When you share about your customers on your social channels what you’re doing really is reciprocating their kindness. Some brands have even developed whole campaigns around sharing their customer’s posts.

Take, for example, Buffer. They routinely share their customers’ photos of the different locales they’re working in. By doing so they get to celebrate their community, which in turn strengthens their bond with that customer. Give back on their behalf

Over the last 5 to 10 years there’s been an explosion of companies that have a charitable giving component to their overall business strategy. There’s even a term for it; “social entrepreneurship.” Companies like Toms, Bombas, and Warby Parker are great examples.

Though it may not be possible, or plausible, to change your entire business model to do something similar, you probably can do one-off events to make charitable donations. A great example of this is an apparel company called Everlane. By doing so you not only provide customers with the value of the product, or service they purchase from you, but there’s also the added benefit of knowing they helped others in the process, too. It can also serve as a competitive advantage, as 81% of millennials say they want to support brands who give back.

Can you remember the last time you got a thank you note from anyone? In the digital age, it’s less and less common. And with scarcity comes value. Hand-written notes are a great option because they tend to make a big impact on the customer, but are relatively inexpensive to do.

For those in sales, it could be a great option as a way to follow-up after closing a sale. HubSpot did just that and got a shoutout on Twitter for their effort. Though that shouldn’t be your motivation for the effort, it can be a nice perk. If you’ve ever been to Louisiana or interacted with Cajun culture, you may have heard the term “lagniappe”. It’s actually a Creole term essentially meaning “a little bit extra” and really serves as a cultural idea to go a little above and beyond for others.

For example, if you went to a bakery, maybe they’d include an extra pastry you didn’t order. Whatever the scenario may be, it’s really just a way to say thank you. A great example of someone incorporating lagniappe is Nuts.com.

When someone orders it’s not uncommon for them to include sample packs of other types of products they think someone might enjoy based on their order. By doing so they’re not only being thoughtful but they’re also introducing their customers to a potential new favorite treat. I believe that’s what the youth call a “win-win.” Give them a say

More and more customers want to have a closer connection with the brands they do business with. Take a moment to imagine how you would feel if a brand you loved not only asked for your thoughts but later implemented them? At Squishable, they’re doing just that.

Squishable makes a line of different plush stuffed figures. Though the company has many of their own original designs, they also accept design ideas from their community. After someone submits a design idea, they put it up for a vote and if it receives enough votes, they make it. The program not only gives them access to a bunch of creative new designs but it also further engages their customers and fans. Depending on your company, you may consider setting up a virtual suggestion box or consider having your customer community vote on what new features they want to built next.

Have a customer appreciation day (or week)

Though it’s fun to come up with new and creative ways to say “thank you” you shouldn’t ignore the classics. Hosting a customer appreciation day, or week, may seem a little simple, but that doesn’t mean it’s something you should skip. Just ask Ben and Jerry’s.

Each year they have Free Cone Day. The idea is really simple, as their site states, “Free Cone Day is our favorite day of the year. It’s a special time to thank fans for their love with free Fairtrade ice cream all around the world.”

It’s not something they have to do, which makes it even more powerful. Depending on the type of business you run, you may have to get a little creative on how you approach this, but we’re confident you can come up with something equally awesome. 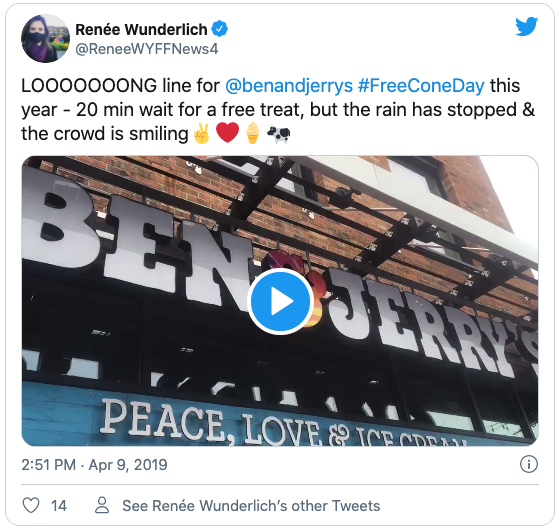 Most of us have that one friend who sends a message anytime we’re in a tough spot. When you receive one of those messages it’s always a great feeling. Among other things, it shows they were thinking of you, which is powerful on its own.

As a brand, you should consider taking a cue from your most thoughtful friend, but consider taking it a step further. When a customer falls on hard times consider offering a discounted rate, or something similar, to help out.

The recent pandemic has shown how quickly things can change and also shed a light on the brands that look out for their customers. Take Loom, a shareable video platform, for example. Instead of deciding to try and profit off of the pandemic, they decided to do what they could to help. Not only did they remove the recording limit from their free plan, they also extended paid trial periods significantly and offered paid plans free of charge to students and teachers. By doing so Loom showed current, and potential future, customers their value extends beyond the revenue they generate for the company.

Without our customers, we wouldn’t exist. Plain and simple. Though we all know that to be true, we may not always do our best at showing that appreciation. The good news is it’s never too late to start.

Whether you decide to include a hand-written note, a few extra goodies, or start a full-blown customer appreciation week, the main thing to keep in mind is that any effort should show gratitude to your customers. As long as that remains your North Star, you won’t lose your way. Jesse has been a support agent for five years. Currently, he’s a Remote Customer Support Advocate at Typeform. When not writing articles, or supporting customers, he writes pop songs with the hopes of getting on a Kidz Bop album, one day.

6 Ways to Be a Better Person & Manager

3 ways to Turn Around a Bad Customer Experience

The Art of Saying Sorry – How to Apologize in Customer Service