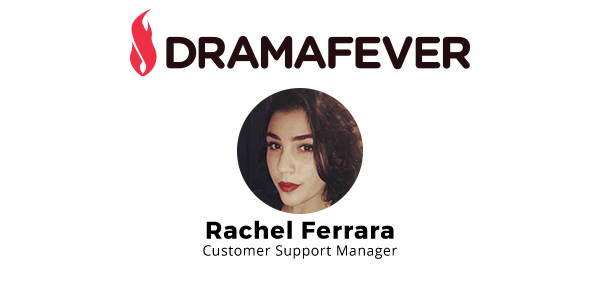 We’re excited to bring you an interview with Rachel Ferrara, Customer Support Manager at DramaFever – a video streaming where you can watch the best Asian dramas in English, Spanish, and Portuguese!

How many cases do you usually handle per day?

We handle probably somewhere between 800 to 1000 cases per day. That’s about average.

And are all of you based in New York?

Most of us are based in New York, we have 2 remote employees: one of them is full-time and the other part-time, based in California. Everyone else is here.

We care about customer support, just as we care about our success. We’re trying to build a community of people who interact with cultures and communities that are not typical for them – that’s our Asian content.

Most of our customers are from the US or from Latin America, so they’re kind of reaching out to a different culture and we want to help guarder that as much as we can. We’re here to provide the bridge between their culture and what we’re serving them.

We try really hard to make sure that the voice of customer is heard everywhere where it’s coming from. Because sometimes companies look at customers like data points and numbers. They check Google Analytics and all of that, you know, saying, “this many people touched this page this many times”.

What was the difference between supporting your users in your early days and how it is now?

In the early days, you are in a learning curve and you tend to be able to take a lot more feedback and act on it very quickly. It was the same here at the beginning: When a customer requested a feature it was there next week. And now, it has to go through a number of other people.

Anyway, we haven’t changed much in terms of our level of support; we’ve managed to maintain a really personal tone in our support: If a customer is writing to us about having an issue with a video, we try to recommend other shows based on what they’ve been watching. Or if we have someone in our team who’s also watching that show, we say: “Oh, I love that show!” We’ve also tried to maintain a small company vibe.

Is there any change in on-boarding of your support team now?

I think so. In the early days, we weren’t even considering remote support as an option. Most companies, just like ours, start with one person doing customer service and when there’s a need, everyone has to pitch in.

When it got too big in Dramafever, there came the decision to get more staff. Later, we went from only hiring people in-house to a couple of remote people, part-timers to cover evenings and weekends.

We don’t want people working until midnight in this office and then commuting home on a subway at 2am. That’s why having that remote capability gave us a lot more peace of mind to make sure that we’re also treating our employees really well.

However, some changes in our processes were inevitable: We’ve had to really step up our documentation for someone remotely on hangouts or so. We’ve structured and documented our processes in a way that people who are working remotely have something to reference with at every point.

Is there any specific characteristic that you’re looking for in people when you’re hiring?

Definitely. I think the number one what I look for are people who are great listeners. Obviously, you want great listeners and great communicators, but being able to listen to what a customer is saying and processing, actually identifying the problem and addressing all of their problems is the most important thing.

Since we do mostly written support, obviously they have to write pretty well. Thank God for autocorrect! This is going to sound a little cliche, but I think that when it comes to customer support, and you are looking for people, it’s really easy to identify the people who are great.

They make you feel like they’re hearing you in your inner conversation, they’re super attentive, they answer every single question that you ask but they also communicate their answers very efficiently. It’s pretty easy to identify who’s listening to you – those are the people you want for customer support.

Listening to you seems effortless, you feel like you can tell them anything, and they can offer you some kind of solution even if it’s not perfect. Those are the guys you want on your side.

Do you also give some specific training for these people?

I think it’s tough because I feel those are soft skills and it’s really hard to cheat at them. Empathy is really difficult to learn. It’s not enough to identify an issue and provide a solution. You have to understand what the user is going through as well as assign an appropriate value to it.

It can sometimes be difficult in certain businesses. For example, I don’t watch Korean dramas but I understand our fan base is very rabid to some extent. Understanding that there’re some shows out there I’d feel excited about and if I were trying to watch it the day it came out, and it wasn’t working, I’d probably freak out.

So it’s about being able to compare experiences even if they’re not the same and that’s really hard to teach. We just need to encourage our representatives to take themselves out of their own experience and say, like, “What is it that I care about?” There’s definitely something.

We’re constantly reminding them that there was a time when this has happened to them. Or, think of a situation at which you would behave the same and empathise with that person even when you can’t empathise with the exact same thing, you can empathise at some level.

Let’s dig more into comparisons: What help-desk tool do you use?

We use Zendesk and Helpshift. We’re in the process of trying to phase-out Helpshift and only use Zendesk. It’s mostly because we’ve found out it’s really inefficient for our representatives to use two different platforms. Since having everything on one screen and not having it on a bunch of places is really best for us.

It is right now.

Do you also have some other channels?

What KPIs do you use to measure your customer service?

We use first response time, full resolution time, percentage of tickets that’s resolved in one email – transaction. Customer satisfaction is actually one of our company white-goals that we’re measured on. The only one that’s at a company level, where we hold the entire company accountable is our customer satisfaction that we get at through using Nicereply.

Do you have any specific goal?

Yes, we do. Right now, our goal is an equal one. I feel like when I started here a little more than a year ago, we weren’t measuring much to begin with. We didn’t really have any KPIs.

But in the past year, we’ve been trying to build ourselves to a point where we now have a great baseline for our metrics and are at the point where we’re trying to start aggressively to meet certain things. And we are now working a little bit harder each day to meet these goals.

Is there any advice that you’d give to your past-self? Is there anything that you know now that you didn’t before?

I think I learn every day. I don’t know if I have advice for my past-self other than: what we do is really important and that’s important for all of us to remember because sometimes, in customer service, we diminish our experience and don’t surface our voices in other places in the company.

I think, it’s one of those departments that is kind of perpetually under-appreciated. So, the advice to my past-self would be: advocate for yourself and your team because the work that we do really matters.

And don’t take phone calls. Phone calls are the worst – email support all day! I really don’t like phone support, and I feel like it’s kind of dying: It’s one of the few channels that most people don’t even look for anymore. If you offer a live-chat as an alternative, most people will take that.

Also emails are measurable, you can obviously have a metrics around phone calls: handle time, and this kind of stuff but customer satisfaction is a lot harder to measure in a phone call.

It really seems less when you have an email or a chat, after, as soon as it’s closed, you get that pop-up which says, “Hey! Rate this response! For Zendesk, our Nicereply is in our signature so they are sent at the end of every email and the same can be done with live-chat, but phones are a lot harder because you have to, “stay on the line to answer this survey”, and no one does that – it’s tough.

I like that email and chat support are a lot more measurable. I just feel like it’s easier for our consumers in ways they may not realise.

Do you have any funny story from your customers service team?

Oh God! Tons! That’s a big question, oh man! Ok, we’ve had a lot of really weird ones. This is actually very strange, it isn’t like a funny story: Through our Helpshift tool, we’ve got a lot of people who just send us selfies – there’ll be no message or there’ll be like, “hi”, and then just a selfie of some random person.

People also have really great user names. For one archive, which is like an old baby-boom generation, most of our demographic is 65 and older, so people’s user names are “so and so’s grandma@aol.net” but there’s also this one time when, because we’re owned by Warner Brothers, this guy wrote us an email and was asking if Time Warner cable was going to expand service in his area, he was like, “Oh, I live in this area, I see Time Warner trucks, are they going to expand service in our area?”

How do you usually answer to their selfies?

We usually don’t. Last time for Halloween, our whole customer support team dressed up like monsters: I was a vampire, I had blood all over my face; someone else was a werewolf; we were all like this really gruesome creatures so we took some group photo, and in October, we were sending that as a response to selfies.

It was pretty funny and I think the other funny ones are specific to our content. We get a lot of people dressed up. We have super fans! Sometimes there’s a younger person contacting us, saying, “OMG, can you help me meet him[an actor], I love him!”.

Do the baby-boomers also send selfies?

No, that’s obvious they don’t. The selfies are pretty fun, we actually collect them, like we keep a list of them, they’re pretty great!

Thank you Rachel for such an interesting point toward customer service! Stay tuned for more Nicereply customer stories.